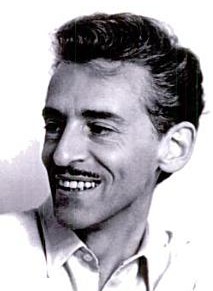 Taurus season is here, and so is the birthday of Robert Piguet. The Swiss-born fashion designer had a handsome look about him, a charming smile with perfect white teeth, dark eyes, and a nose full of character. He looks like the romantic interest in an Ernest Hemingway novel. Maybe it’s his carefully groomed thin mustache, which suggests his impeccable style.

These days Piguet is known much more for his perfume line than for his fashion house, which ran from 1933 to 1951. He had his share of edgy designs, and purportedly once had is runway models wear masks and carry knives. Perhaps these designs reflected the sense of healthy rebellion it took for Piguet to say no to the family banking career and yes to a life of art.

Even though Piguet’s name isn’t part of the world of fashion any longer, he still left a significant mark. He was the one who trained Christian Dior and Hubert de Givenchy. These two have gone on to create some of the world’s most renown fashion houses, so in that way Piguet left his mark on the fashion world.

But enough about the men. Let’s talk about the women.

In the 1940s, Piguet decided it was time to try his hand at perfume. Wisely he sought out the help of perfumer Germaine Cellier. Cellier was a driven young woman who earned a chemistry degree in Paris and had been landing jobs at French companies like Colgate-Palmolive where she worked as a functional perfumer. Functional perfumes are those that we encounter every day in hand soaps, detergents, and the like. When Cellier met Piguet, she had an opportunity to shine beyond the subtleties of everyday scent.

And shine she did, creating Piguet’s first perfume Bandit in 1942 to be debuted in 1944, and later creating the famous scent Fraças. Bandit is said to be a sort of dangerous scent. It’s a leather chypre that takes something a little feminine and wraps it in a bad-ass attitude. You can read a pretty compelling review of it here. Cellier was praised for being a little unconventional and daring in her creations, and the edgy scent of Bandit was no exception.

Cellier proved her diversity as a perfumer when she created the more famous Fraças. This scent is like the light to Bandit’s darkness. It’s floral and delicate, and includes the best spring scents like Indian tuberose absolute, orange blossom, and iris root butter. Cellier designed scents for other perfume houses as well, and when she wasn’t busy working she was rubbing elbows with some of France’s most interesting characters, like Jean Cocteau.