Cambienne: An Ever Changing River of Perfume. 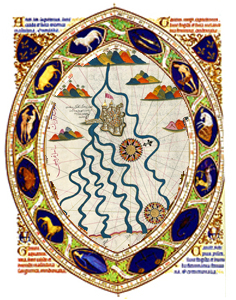 The French word for change is Cambienne.

“Cambienne” is also the name that Fabienne gave to a series of perfumes that began in 2007. Each year’s Cambienne began in the first quarter of that year. It is made only once. After so much of that first Cambienne is sold, the remaining is used as the base for the next Cambienne, and so on throughout the year. Each new blend builds upon the past, growing ever more complex throughout the year. A truly inspired idea.

The ancient Greek philosopher Heraclitus held that all things constantly change and that change is the essence of the universe. In his most famous dictum, “No man ever steps in the same river twice”, Heraclitus points out that the river is in constant change as the water flows from one moment to the next or from one place to another.

Two weeks ago, I consulted an old book of early Greek philosophy. I turned to the chapter on Heraclitus. After a few pages, I came upon a line that took me by surprise: “…even the posset separates if it is not stirred!” We believe it is time to stir things up a bit.

After that, at some point, when the muse reveals herself, a new Cambienne will flow forth.