A Rose for St. Fabian’s Day 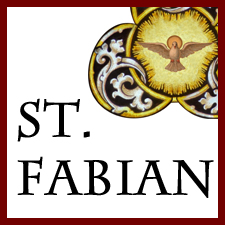 What does holiness smell like? If you turn to Catholic tradition for your answer, you’ll find that it smells floral. At least, that’s one of the biggest notes often used to describe the odor of sanctity, an alleged smell given off by the body of a Saint who has recently passed. The flowery smell drifts up from the body in one final indication that this person was in close connection with the divine during their life.

Lots of people translate the “odor of sanctity” in this way—as the literal scent that emanates from a saintly corpse. Others take the phrase to be more abstract. In such an interpretation, the odor of sanctity refers to the holy aura of a Saint, their pure state of being and their freedom from mortal sin at death. To die in such conditions is to die in the odor of sanctity.

When the odor of sanctity is described as an actual smell, it’s usually said to contain hints of flowers like roses and lilies, or spices like myrrh and cinnamon. The best of these notes are combined in the Possets blend St. Fabian Perfume Oil, which Fabienne created to honor her patron saint.

She first released this perfume in 2008, and described its origins in a blog post on St. Fabian’s Day in 2011. Here she gives a brief history of St. Fabian himself, and what made him a remarkable holy figure. The legend says that St. Fabian was elected as Pope when a dove landed on his head. The arrival of the bird was interpreted as a sign from the Holy Ghost that Fabian, once a humble farmer, was meant to be the next Pope. You’ll find that the St. Fabian Perfume Oil features a dove on its label as a reference to this piece of the story.

Fabienne dedicates most of her post to a more complete story of what made St. Fabian a leader worth honoring. For instance, during his time as Pope, he was able to retrieve the bones of two late saintly figures who had died in exile so that they could receive proper burials in Rome. When St. Fabian passed, if the lore of the odor of sanctity is true, he surely must have been surrounded by a cloud of rosy, resinous scent.

In keeping with Fabienne’s tradition, Possets will only sell the St. Fabian Perfume Oil blend on St. Fabian’s Day, January 20th, from 12:00 midnight to 11:59 p.m. here. Its main note is a fresh rose accord that immediately transports you to a lovely spring garden. A touch of amber and incense finishes this simple, feminine, beautiful perfume.

If you’re living in a place with a cold winter (like the presently snow-covered Cincinnati) this rosy perfume might be a great tool for wishing away the winter blues. And even if you’re not, the scent of holiness as interpreted by Fabienne is still a beautiful Possets oil to add to your collection. I’m addicted to its light, natural beauty, and would have to feel in awe of anyone who smelled this way during their transition into the afterlife.